The distribution of water snakes in the USA is illustrated in the table below. You can download a pdf of the table here.

The green water snake Nerodia cyclopion is a relatively large snake with a greenish gray or olive brown color on its dorsal side. It is considered highly aquatic in the sense that it spends more time in the water than most other water snake species.

However, on rainy days it can be found up to 100 meters away from water. When captured the green snake will bite and secrete a musk, which smells worse than the musk from other water snakes. The difference between sexes of the green water snake is evident. The female is approximately 25% larger than the male (Fitch, 1981)1. 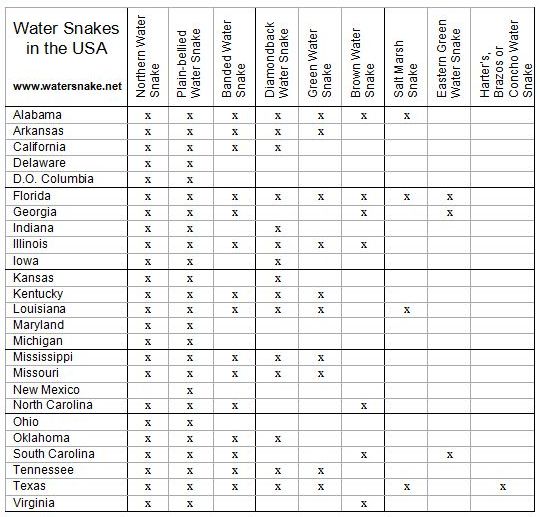 Please report errors in this table to [email protected]

As this snake is perhaps the most common snake in the U.S., it is described at the home page of this website.

The Brazos water snake (Nerodia harteri harteri) is a fast-moving, relatively slender and small snake. Its color varies from brown to grayish brown, and it has four lengthwise rows of four olive brown spots. This snake, normally reaching lengths of two feet, is only found in central Texas, where it lives near fast-flowing, shallow areas of the Brazos River. It prefers water less than one foot deep and a river floor with stones so it can find plenty of small fish. It is not as vicious as other water snakes, and its teeth are too short to penetrate the skin of an adult2.

The diamonback water snake (Nerodia rhombifer) is a large and heavy snake reaching a length of four feet, although larger specimens have been reported.

The blotched water snake is actually a subspecies of the plain-bellied water snake with the Latin name Nerodia erythrogaster transversa and it is not described in detail here (not yet).

The brown water snake (Nerodia taxispilota) is a fairly large snake, with adults reaching lengths of 4½ feet. Some people are convinced that this is venomous snake due to its size, but as with all other water snakes, the brown water snake has no poison and is not venomous. This fear is fuelled when these snakes accidentally drop into someone’s boat; they instinctively think to get rid of it due to suspicion that they are venomous cottonmouth snakes due to their similar appearance. Chances are that if a snake drops into your boat, it is a water snake, and looking at the abundance of water snakes versus cottonmouths, water snakes are many, many times more common than cottonmouth snakes.

Brown water snakes prefer large rivers and lakes. They typically bask on limbs overhanging the water at heights up to 10-15 feet and drop into the water when disturbed. When disturbed at other places, they flee as well and dive under water. Cottonmouth snakes are almost never found in trees overhanging water.