Water snakes (Nerodia spp.) belong to a family of non-venomous colubrid snakes found in North America. In the southeastern USA, water snakes are among the most abundant and most often encountered reptiles. Although they are not venomous, they will defend themselves and bite if threatened, and water snakes are known to be aggressive. 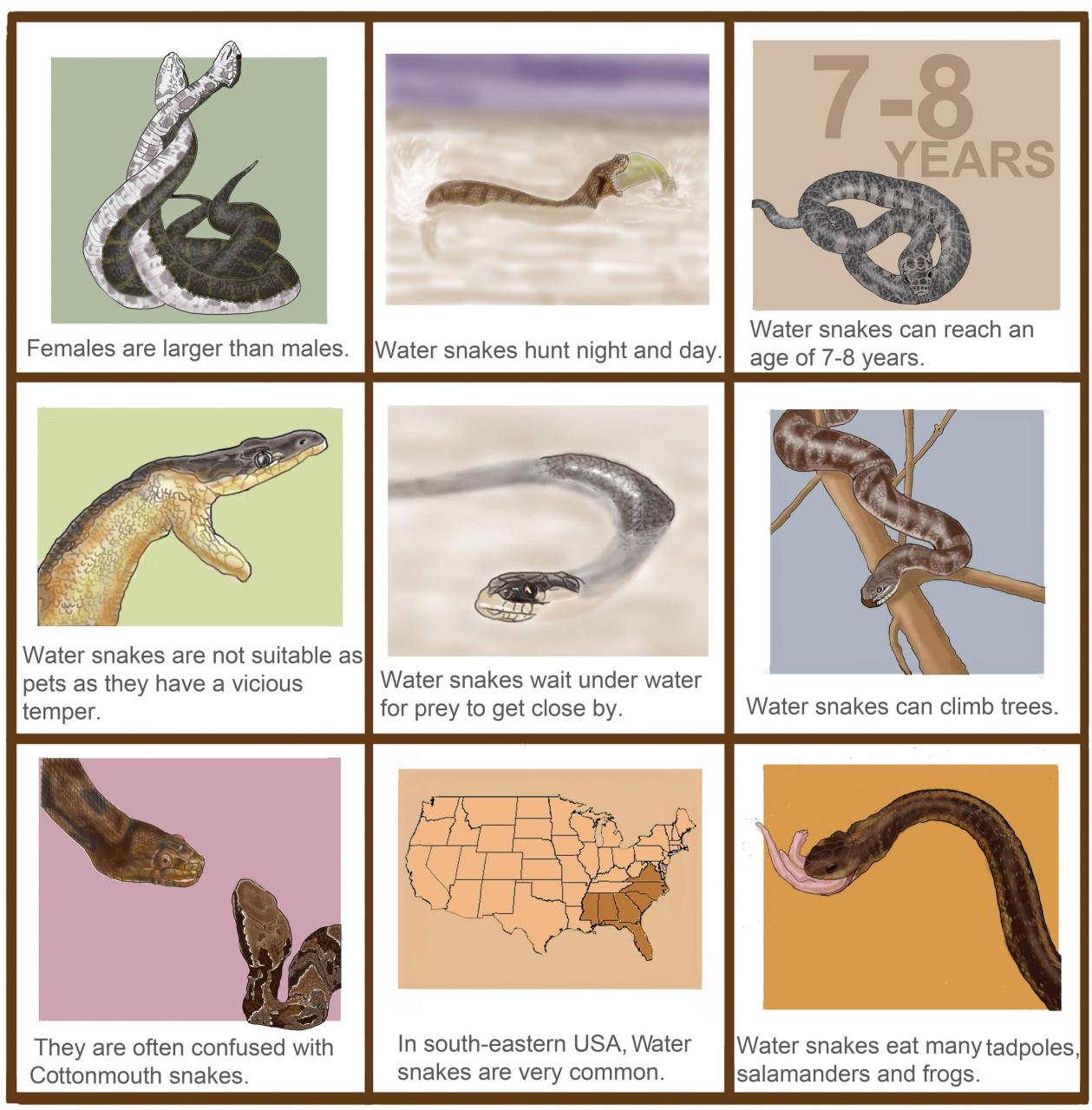 Water snakes can climb, and they are often found resting on branches above the water. When disturbed, they will drop into the water—sometimes into boats passing by.

Water snakes commonly forage in the water’s edge looking for small fish—preferably the slow moving fish (Linzey & Clifford, 2002)1—and other animals in the shallow water.
According to a study (Mushinsky et al. 1982)2 there is a shift in prey choice towards frogs and other larger animals when the snakes reach a length of about 1.5 feet. However, a water snake less than 1.5 feet will probably not eat many frogs or other larger animals (ibid). 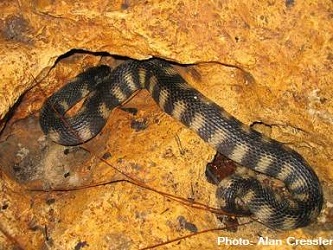 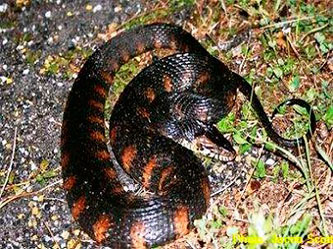 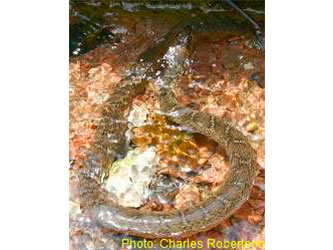 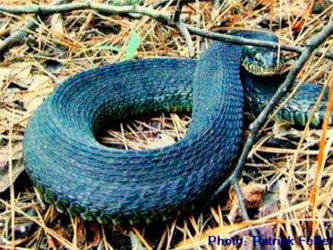 Water snakes dwell in shallow waters with their mouths open waiting for any prey to come close by—within a few inches—so they can close their jaws around the prey. They also move around on the underwater surface looking for prey in rock crevices and other hiding places (Drummond, 1983)4. Water Snakes hunt both day and night.
They have a compound in their saliva inhibiting coagulation of blood. The advantage from having an anti-clotting compound in its saliva is that, when prey escapes, it will leave a trail of blood that the water snake can follow.

Water snakes mature when they are three to four years old5. Mating takes place in the spring, and snakes are born between August and October. Often many male snakes are courting one female snake. Water snakes give birth to live snakes. The eggs hatch within the female body before the birth. Litters of about 20 snakes are common, and the newborn snakes have a length of 8-12 inches on average. 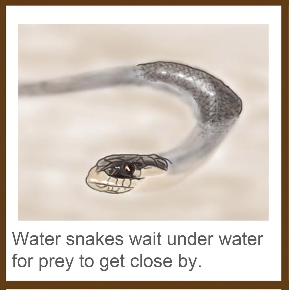 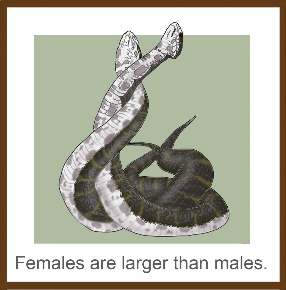 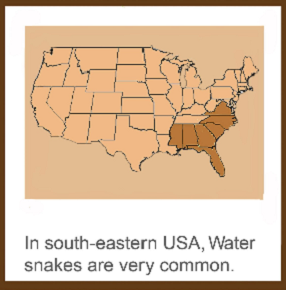 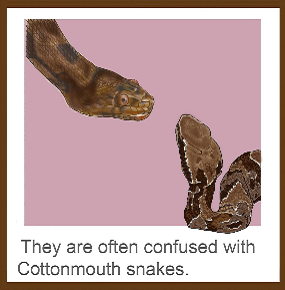 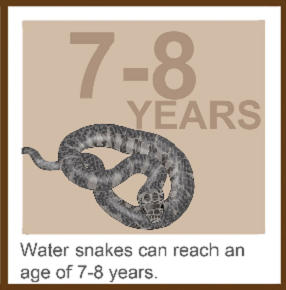 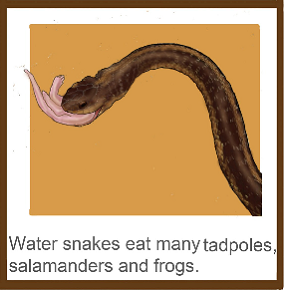 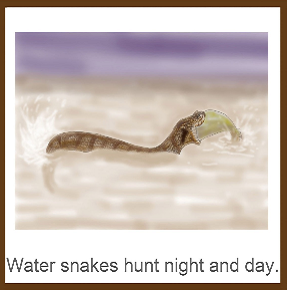 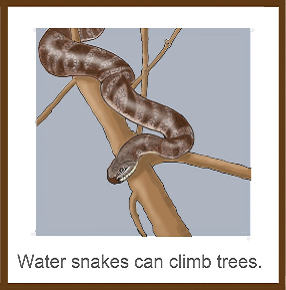 Water snakes are often confused with cottonmouth snakes. There are a lot of differences, but cottonmouths have a triangular head and eyes that are not round. Water snakes have a round head and round eyes.

In this video you can see how a water snake (Nerodia fasciate) catches a fish and swallows it alive.

The Northern water snake (Nerodia spp.) is found in many different types of freshwater habitats. It can be found near large rivers and small ponds as well. When conditions are good, these snakes can be found in very high numbers. This type of snake is a relatively large snake, with adult females reaching a length of almost five feet.
They can reach an age of approximately seven to eight years. Their litters have a size of anywhere from 10 to 40 snakes, and new snakes are born during late summer and early fall. The snakes mainly feed on fish, which constitutes approximately 50% of the snake’s varied diet. Larger individuals also eat a lot of frogs, while smaller individuals eat anything from invertebrates to small mammals.
Because of its vicious temperament, the Northern water snake, as well as other water snakes, is not suitable for keeping as a pet. As the Northern water snake is fairly common and shares some similarities with the venomous cottonmouth snake, many are killed on the suspicion on being cottonmouths.
Water snakes also have scent glands near the base of their tails (in their cloaca) from which they can excrete an ill smelling musk in case they feel threatened.